Stirton Productions was founded in 2001 to develop commercially viable and entertaining movies, like the award winning The Planet and British Independent Film Awards nominated One Day Removals, as well as client driven promotional projects and animations. The company has also developed and produced several television pilots and short films.

Stirton Productions movies and short films have been accepted to many international festivals, such as The Raindance International Festival, Edmonton Festival and Glasgow Film Festival. The movies have been well received and have usually played to a capacity audience.

The company is headed by writer/director Mark Stirton, and Producer/Production Designer Michael G. Clark who form the core of the company with over 25 years of industry experience between them.

Stirton Productions director, Mark Stirton, is currently working on a new screenplay for an action movie vehicle called Good Guys V Bad Guys, which may be developed independently from Stirton Productions, or as a co-production.

He has also just completed his autobiography Movie Boy, which covers his personal life, his introduction to filmmaking, the pitfalls of making independent movies and the most comical armed robbery in Aberdeen’s history. The manuscript is currently with several agents seeking publication.

Should you wish to view the manuscript or screenplay, for possible development, please contact Mark Stirton.

Mark Stirton is a writer/director and CEO of Aberdeen based Stirton Productions.

Mark attended a Broadcast Media course at Aberdeen College before working in local television station, Channel Ten in 1997. After leaving Channel Ten, and wishing to create his own projects, Mark founded Stirton Productions in 2001; initially creating several television pilots and short films before taking on the daunting task of a full-length feature.

In 2004, Stirton Productions made their first feature length project, The Planet, which won a highly commended award at the Manchester Fantasy film Festival and later gained distribution in US, Europe and Japan. His second feature One Day Removals premiered at the prestigious Raindance International Film Festival. The movie has since been acquired

by Canadian sales company, Cinemavault. To date, One Day Removals has been sold to HBO for European distribution and Blinkbox for digital distribution in the UK.

Mark is currently working on several screenplays and an autobiography. 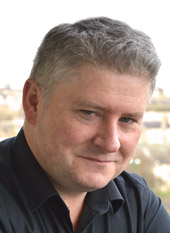 Michael G. Clark is a professional designer and animator from Aberdeen, Scotland.

Launching his first company at age 19, Michael ran a successful photography studio for several years before studying for an art and design degree. During this time he became involved with the local film making community; initially assisting in short movies and television projects he eventually joined production company, Stirton Productions, as an art director.

Currently splitting his time between film production and corporate digital animation, Michael also provides advice, support and the occasional animation for other filmmakers. He has been involved with productions in the United States, Europe and Australia.